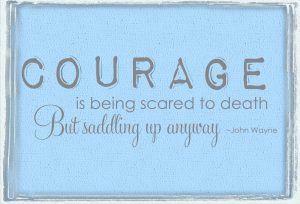 As I was recovering from my hip replacement, my RA doc thought it might be time to try the biologic Actemra. It worked for me before hip issue. It was time to do it again. But, she said, first we needed to check out the change in my uterus that was noted on my hip MRI.

She ordered an ultrasound of my uterus that included a vaginal probe (didn’t know they could do it.) Actually, she handed me the probe and told me to put it in. I did it.

Results showed a thickened uterus consistent with tamoxifen use. It also showed a mass.

Next stop was the GYN doc who thought it was a polyp not cancer since there was no bleeding.

Next stop was outpatient surgery of a D&C and biopsy. She was optimistic.

The results weren’t good. It is sometimes called Uterine Serous carcinoma, or uterine papillary serous carcinoma (UPSC), or serous adenocarcinoma. It is easily googled just writing serous cancer.My doc said she didn’t know much about this cancer. She referred me to a GYN oncology surgeon who I saw in three days. In the meantime, I googled it. And it scared me,

Serous cancer is a rare, subset of endometrial cancer that is aggressive and carries a poor prognosis. It is erratic in its behavior similar to that of ovarian cancer.

I am in the lose hair stage of carboplatin/taxol first infusion. Not as bad as I thought it would be,

So here I am, back in the world of cancer. I was expecting it, but not expecting it. Hope I can be of some use to my fellow cancer travelers.